For Everyone Concerned with the Safety of Flight

February 16, 1990, the historical date in the field of the beginning of the global use of airspace North America – the Arctic Ocean – USSR – Southeast Asia and back

On behalf of the USSR Government, I signed a Memorandum on the opening of new international air routes between the USSR and the USA, through the Arctic Ocean, Soviet airspace to and from Southeast Asia

February 16, 1990. US Federal Aviation Administration. The signing of the Memorandum on the opening of new international air routes between the USSR and the USA, through the Arctic Ocean, Soviet airspace to the countries of Southeast Asia and vice versa.

At the same time, an Agreement was signed on coordination and organization of communication between the regional centers of the Internal Affairs Directorate of Anadyr and Anchorage (Alaska, USA)

The head of the US Federal Aviation Administration, Admiral James B. Busey, congratulates the head of the Soviet delegation V. Shelkovnikov on signing the most important Memorandum

A conversation about further cooperation after the signing of the most important Memorandum with the head of the US Federal Aviation Administration, Admiral James B. Busey.  It is planned to prepare an Agreement on coordination between the Main Air Traffic Flow Management Center (Russian Federation) and HQ ATFM FAA (USA) that will suggest that, in accordance with ICAO Doc 9426, “Agreement on Coordination” and “Agreement on Establishment of Communication”

Unfortunately, 30 years have passed, but this Agreement on coordination and organization of communication between the Main ATS centers of Russia and the USA still does not exist, despite the fact that the Arctic is an important geopolitical hub with significant implications and advantages for international civil aviation.

It should be noted that the Memorandum signed on February 16, 1990 on the opening of new international air routes between the USSR and the USA, through the Arctic Ocean, Soviet airspace to the countries of Southeast Asia and vice versa, became the basis for further active cooperation in this area at a higher level. It was a signal also for international aviation cooperation.

Oct 14, 1994 Following a joint evaluation of the Russian air transportation system, a U.S.-Russian team recommended immediate steps to shore up safety oversight. FAA worked with Russian authorities to assist implementation of these recommendations, and continued to participate in efforts to improve communications and routes for international flights in the area of Russia.

Important Note. In 1989, this event was preceded by a joint visit and a detailed study of the issue with the specialists of the US Federal Administration throughout the Far East of the USSR from Providence Bay to Vladivostok on the possibility of carrying out planned international flights

USSR. Anadyr. We are preparing with the commander of the Anadyr Joint Squadron for a meeting of the delegation of the US Federal Aviation Administration

The meeting of the delegation of the US Federal Aviation Administration, led by Frank Cunningham (center) at the Providence Bay airport

USSR. Magadan. Negotiations with the head of the Magadan Department of Civil Aviation Trezubov Victor Grigorievich

USSR. Khabarovsk. V. Shelkovnikov and the head of the delegation of the US Federal Aviation Administration Frank Cunningham

USSR. Khabarovsk. After speaking at Radio Far East about the prospects for opening airspace. Exchange of business cards with the program manager.

USSR. Magadan. Seeing the delegation of the US Federal Aviation Administration home.

The head of the delegation of the US Federal Aviation Administration Frank Cunningham and V. Shelkovnikov.
Deputy Head of Delegation Frank Price asked me to be photographed with an American hat.
(The photo was taken in the captain’s cabin of a ship crowded by people following us from Anadyr city through a stormy and cold bay to Anadyr (Ugolny) airport.)

Bearing in mind the Memorandum of February 16, 1990 and the need for its implementation, I established contact and constant coordination with ICAO, IATA and FSF.
A huge role was played by Christian Eigl, a long-term colleague and friend, director of the European and North Atlantic Office of ICAO, who constantly coordinated the important work that had begun. On his advice, I signed an order to organize and establish the Magadan Oceanic Air Traffic Control Center using modern CNS/ATM technology.

In 2000, before retiring from ICAO, Christian Eigl organized an international conference in Russia, in Magadan, concerning CNS/ATM Technologies in Air Traffic Control over the Airspace of the Arctic Ocean. 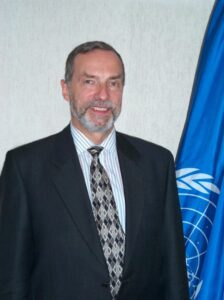 Christian Eigl, a long-term colleague and friend, director of the European and North Atlantic Office of ICAO.

Invaluable assistance in improving the safety of flights in this project was provided by a long-term colleague and friend, President of the FSF, Honorary President of the International Flight Safety Fund of the USSR and Russia John Enders

In 1991, he organized an international seminar in Russia, in Kamchatka, “Volcanic ash – a serious hazard factor for aircraft”. On his initiative, IATA provided financial assistance to the Institute of Volcanology to increase the speed of information transfer on forecasting and volcanic eruption

Moscow. Kremlin. FSF President John Enders at a meeting with Marshal Yevgeny Shaposhnikov, Advisor to President Boris Yeltsin. Shaposhnikov in the center, John Anders to the right.
(Discussion of the opening of airspace and safety of)

Continuous coordination between the FAA and Rosairnavigation on the implementation of the project was carried out by the regional representative of the FAA in Russia and the CIS, our highly appreciated colleague Denis Cooper. 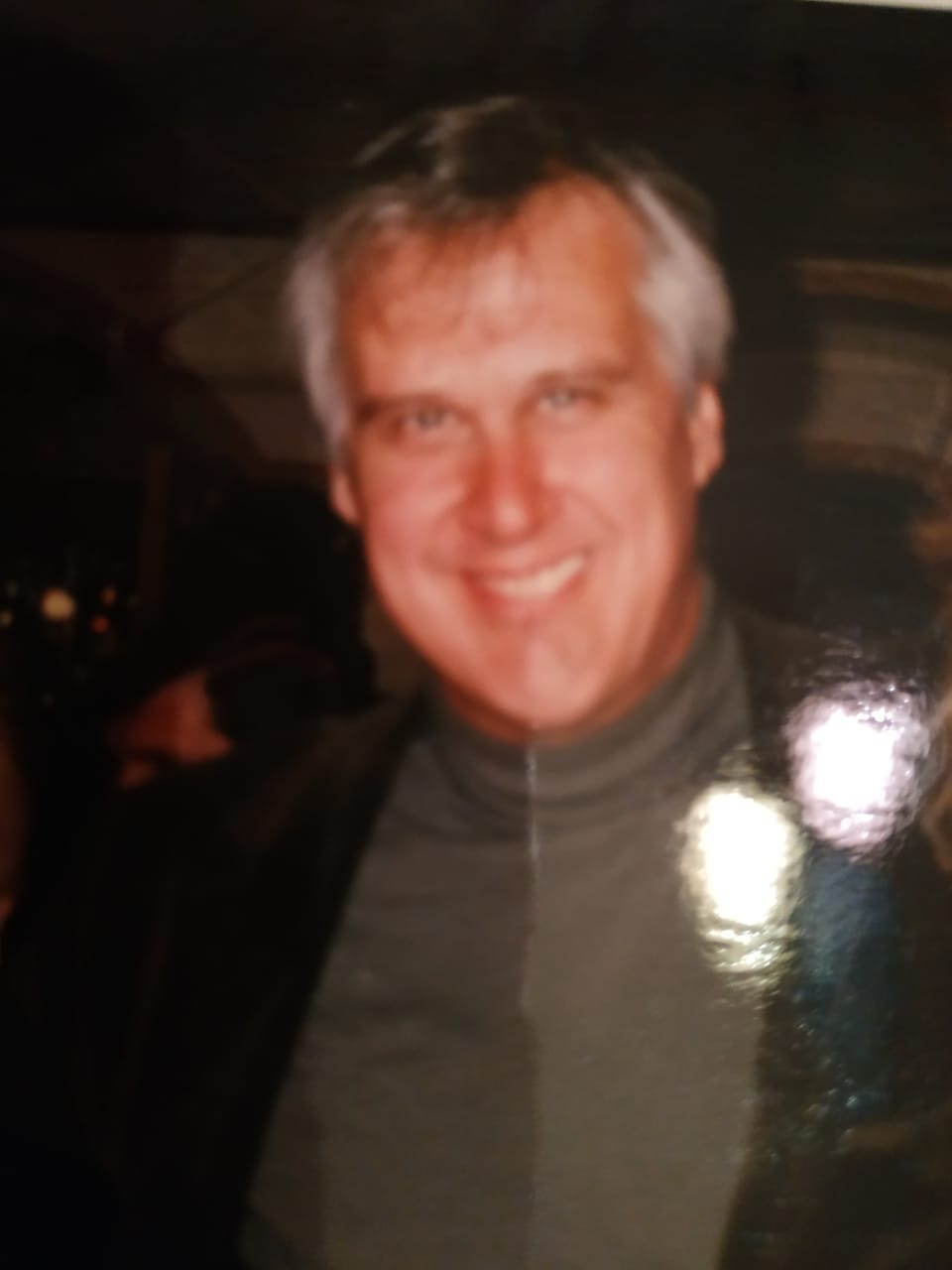 Denis Cooper. Representative of the FAA in Russia and the CIS

In the mid-80s of the last century, at the first international conference of the Air Traffic Control Association (ATCA) in Ottawa, a talented American scientist, JTA CEO Jerry Thompson proclaimed a message: “Think Global.”
He outlined three huge economic markets for air transportation in North America, Europe and Asia, and proposed to interconnect the largest cities in these areas of the world with air routes close to orthodromic. In the case of the implementation of the idea, three large corridors are created, which overlap each other.

The first corridor between North America and Europe is well-known and is one of the busiest in the world.
The second corridor is from North America to Asia. Busy routes over the North Pacific (NOPAС) form the easternmost edge of this corridor and for the most part it is not developed yet.
The third corridor connects Europe with Asia. Southern routes over the territory of the former Soviet Union were opened during the war in the Middle East. The northern, trans-Siberian route, over the territory of the former Soviet Union is beginning to function actively.
If you look at the second corridor both from the North American and Asian sides, it will be obvious that the opening of this corridor will fundamentally change the picture of flight operations. In the opinion of Jerry Thompson, in the next half of the century, 75 percent of all aircraft will fly through this section of airspace. These flight operations will affect the airspaces of Canada, Russia, and China.
After signing the Memorandum on February 19, 1990, the ideas mentioned above received support and a consortium called Global Air Transport Systems and Services (GATSS) was created. It included companies Westinghouse, ATT, IBM, Hughes Aircraft , DASA with the aim of promoting the development of the Russian (at that time USSR) airspaces where modern technology would be applied, Western and Russian science and industry would participate, and user fees for the passage would be directed to opening new routes and improving their technical infrastructure. JTA was the technical leverage in creating the final plan.
In general, this basic idea was accepted by the state, regional and local Russian government agencies.
However, in September 1993, at the 38th ATCA Conference in Nashville, Jerry Thompson expressed his concern regarding the issue:
“Due to a number of political, technical, economic and procedural reasons, with the actual availability of technical potential, the GATSS consortium broke up. Each of the GATSS companies pursues its own interests. European suppliers present alternatives. Others got involved in the competition. In general, there are almost no actions. The price of such a delay is very significant.
By the end of 1994, Russia’s shortfall in revenue for flights would be about $ 2 billion.
Losses of global air carriers will be even higher.
The consequences of these losses for Russia, for the development of Russian aviation, airplanes, airlines, air traffic, airports, for the Russian economy, Russian industry, technology and good employment are immeasurable.
Figures comparable to those proposed in the form of loans and subsidies by the Big Seven, the European Bank for Reconstruction and Development, etc.
We must continue to implement the Russian program immediately. Every day of procrastination costs us all millions of dollars.

I suggest:
1. That we, the aviation industry, all of us, including airlines, government agencies, suppliers, support the opening of these routes and the creation of their technical infrastructure on a competitive basis as soon as possible.
2. Take as a basis the GATSS technical and operational plan.
3. That we support the Russian government, through the Rosaeronavigatsiya and through compatible ICAO standards and practices, in the implementation of this project.
4. So that we immediately continue to work on the opening of selected international routes, especially in the Far Eastern corridor, in order to get the benefits for users and revenues for Russia as soon as possible.
5. Continue to work with local and regional governing bodies to implement the plan in small steps, but always consistent in the plan.
6. To introduce Russian industry into the implementation process through cooperation projects.
7. Establish a reasonable framework for business competition standards ensuring collective success.
8. A group of international Experts with the support of the FAA is supporting the Air Navigation Agency in adhering to the standards and practice of implementing the plan.”

Though the process is sluggish, the idea of Jerry Thompson is being put into practice.

And, if we look at our planet from the cosmic space, we will see enormous opportunities in the field of air transport and air communications, however, these opportunities are not implemented.

We all need to remember the words of Jerry Thompson, who has already left our world: “Think globally! Every day of delay costs us all millions of dollars and missed opportunities. ”